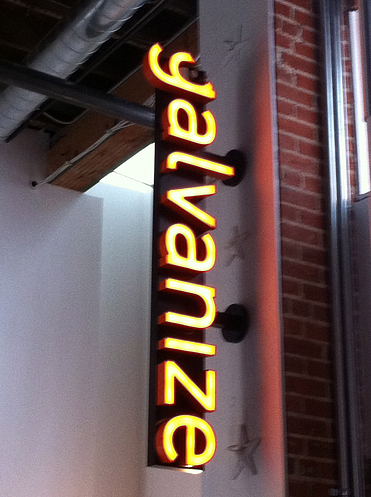 In the old Rocky Mountain Bank an Note Co. building you will find housed some of the most innovative minds in Colorado, if not the nation. Inside the worn brick walls is a mix of modern furniture from Knoll Inc., digital wall signs, and a great café and bar. It is the culmination of old-world design and conflicting design elements that really creates a warm and inviting space. The entire space is an environment that facilitates communication and collaboration.

Galvanize and their use of Interior Signage

Signdealz has officed at Galvanize since it opened last year in October 2012. We were excited to be a part of the initial project and have the opportunity to show off our wide variety of capabilities when it comes to electric and architectural signage.

There are basically two types of interior signage. This would include electrical or lighted interior signage and the second type is generally considered dimensional, or non-illuminated interior signage. The most common is dimensional, mostly because of it’s cost and range of use. This type of signage is often seen behind the wall of a facility entrance, or in boardrooms across America. It’s versatile and can be manufactured out of a combination of metal, wood, or plastic and is usually painted or laminated with a digital print. 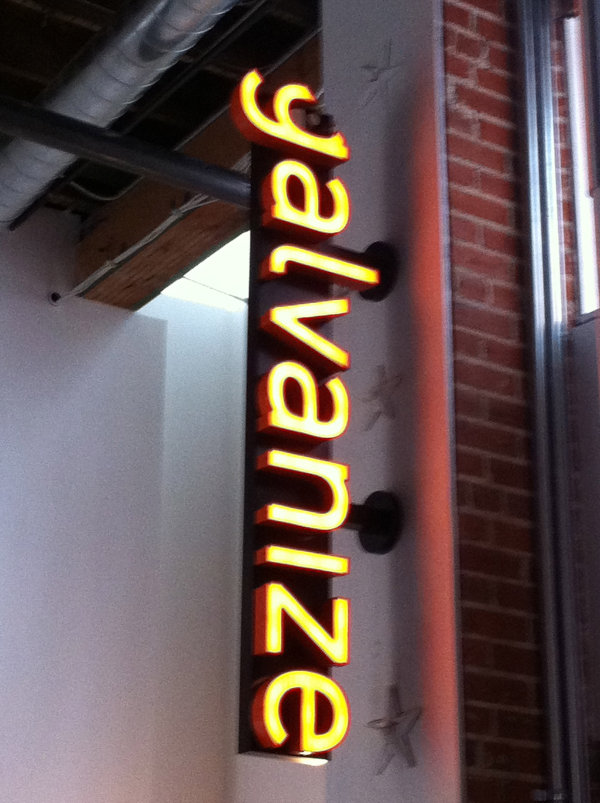 Galvanize chose Signdealz to design a lighted interior sign that would be a centerpiece for the office area, given that there is usually so much activity in the main atrium. The sign needed to use the Galvanize logo lettering, and stand out in such a way to be seen from the entrance, basically guiding people from the main atrium, to the main desk where most of the activity for Galvanize takes place.

We used channel letters mounted on a decorative raceway. The channel letters are actually pretty specific for this application. The returns of the letter, or sides, are very thin. They are only 2.5” thick, giving them a low profile look of a dimensional letter. We used a very wide spectrum LED, so there would not be any “HOT” spots, or brighter portions of light scattered throughout each letter. The faces were laminated with a 3M High Performance translucent vinyl, giving them a very vibrant color both from a lighted and non-lighted state.

The simplicity of the sign says volumes for it’s basic functionality. It has the personality of the Galvanize brand, simple and innovative at the same time. It stands as a beacon for those who enter the building and we were glad to be a part of the team who opened the facility. Thanks to Jim Deters and Chris Crosby for their creative guidance throughout the process.

If you have questions regarding this project or would like to have Signdealz develop an award winning sign package for your next facility feel free to reach out to us on twitter @signdealz or call at 303.447.1101.