Nestled next to the banks of Sloans lake, you will find the tiny town of Edgewater Colorado. Founded in 1861, the town of Edgewater was once a farming community in the late 1800's, that eventually was swallowed up by the expansion of Denver at the turn of the Century. In 1889, Edgewater was once the home of the Manhattan Beach Resort, later abandoned in 1914 (1). My wife and I lived in Edgewater back in 2010, before our move to Boulder. It's a very cute little spot in Denver metro. Edgewater has not grown in size, but definitely in the density of homes and businesses. Communicating with those customers was the underpinning of the decision to get the aging LED Sign working. 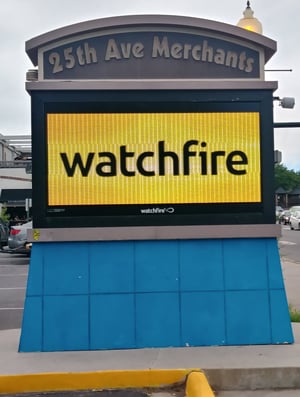 Many customers struggle with the decision to replace an aging LED Sign. First of all, LED Displays are expensive, often costing thousands of dollars. One would expect such an investment to last a long time. Unfortunately, we find it's not always the case. Most LED Displays manufactured out of China don't have the required parts and build quality to sustain the high-temperature swings you in Colorado. This often leads to failures in many components that make up an LED Sign.

Signdealz worked with the City of Edgewater Colorado to replace their aging 25MM LED Marquee. It quit working after about 6 years after they purchased the display and they could no longer get support without paying thousands of dollars in repairs. They finally realized that if they needed to replace the display. The City of Edgewater used the display to communicate important events to the community. This became especially important, given the fact, the City Municipal building had moved in 2018, to it's new locations on 1800 Harlan St. Most residents of Edgewater took the stroll down Sheridan to pay their utility bill, file permits, or pay their property taxes at the old municipal building. 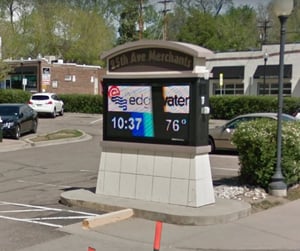 The original display was manufactured and installed by one of our competitors, let us call them YESNO Sign Company. YESNO Sign Company purchased modules and individual components from various Chinese subcontractors to create the display. This process of using untested interconnected devices creates a lot of long term issues. Most customers won't find out any of these issues until the sign starts failing. One of the most significant issues you run into when you piece together a display from various parts is reliability. Your product is only as good as your weakest component. Outdoor digital displays require a lot of engineering work to be able to operate in temperatures as low as -30 to a high of 120 degrees or more. The subsequent issue is also repair parts availability. When a sign is built from available parts, once those parts become unavailable, then it could be weeks or months for the sign company to get a replacement part.

Think of your sign as a big TV with a large amount of electronic equipment inside. That equipment must stay cool to operate well. The only difference is your TV isn't outside being blasted by UV radiation all day long with temperatures exceeding 120 degrees. The fans inside your sign bring fresh air from the outside and distribute it over all those electronic components. The average 3'H X 8'L LED sign will have up to 4 fans inside. More significant signs can have up to hundreds of internal fans keeping the sign cool. The on-board computer called a controller controls the fans. There is a thermostat inside the sign measuring the internal temperature. Once the temperature inside the sign increases above a preset level, the fans turn on. As the temperature rises, the fan speed is accelerated to bring in colder air.

Lower quality signs may not have the required technology to control fan speed in this fashion. They often run the fans at high speed all the time, and eventually, those fans start to fail with constant use at 100%. Once the fans start failing, it's only a short time until you start having major component failures cascading throughout the sign from the controller to the power supplies and finally the LED modules. Some manufacturers use filtration systems inside their signs. Filters sound like a good idea, but ultimately those filters need to be serviced, which costs a lot of money. If for some reason your sign company forgets about those filters, then time goes by and they get clogged. No ventilation equals heat, which equals the premature death of your sign.

Your outdoor LED marquee is going to not only battle the intense heat and cold of any environment, it's going to have to battle moisture. Moisture damage can come in many forms. From the 95% humidity of a Missouri summer, to the salt bath that can come from the coast of California, your sign has to resist corrosion from various elements thrown at it.  The exterior of the sign is going to take the initial brunt of this battle with nature. Signs built from aluminum have a large advantage. Aluminum is corrosion resistant, and if properly painted or powder coated, it should withstand the elements for a number of years.

The next level of moisture resistance comes from the LED modules themselves. There are two types of LED module technologies. Through hole and SMD. The most common and cost effective type of LED technology is Through Hole. This technology uses three independent LED's to create the color you see coming from the screen. In each pixel you will find one Green, Red, and Blue LED. This is the same for the SMD (Single Mode Diode) technology, except the LED's are much smaller and are contained within a condensed silica wafer, allowing a more dense configuration than through hole configurations. Those LED's are soldered to a circuit board that connects the control chips on each board to the controller. If the PCB board are in any way exposed to the elements, the connections will corrode, and the sign can fail. Some manufactures will coat the circuit board with a protective coating on both sides, but UV radiation exposure from normal sunlight can eat away that coating near the connections on the face of the sign. If your see a sign where the LED's have sporadically failed causing dark spots on the screen, this is often a reason for failure.

If your asking how cost can be a reliability factor, then here comes your answer. When you go out to buy a new car, as consumers, we have been accustomed to the fact that a high level of product quality in automobiles is a standard. A high level of quality is assumed. We expect our car to function flawlessly with only a minimum of preventative maintenance for years. Ten years ago KIA motors was seen a one of the only automobile manufacturers to produce a modern car that didn't seem to follow those rules. KIA's were very cheap cars, but quality was lacking. If you purchased a KIA, and it didn't break down in 4 years, you were lucky. You might have saved some money initially, but the car didn't retain it's value and may have left you on the side of the road. Now, KIA, a South Korean auto maker, has reach a level of quality on par with the rest of the automobile industry. Why the big turn around? Because if KIA didn't obtain that level of quality, the brand would eventually be rejected by consumers.

In LED signs and marquee's, we are seeing the same battle taking place. Unfortunately, consumers in this space are not as informed as in automobiles. Most LED sign manufactures from China use your lack of knowledge against you. The Chinese flood our market with cheap low quality products and use your local sign company to sell it to you. There is no implied level of quality and this provided a large opening for lower quality products to make it into the market. Worst case scenario for the local sign company is they get to charge you for service calls after the 1 year warranty is over.

The real conversation you need to have with your sign company is about ROI (Return on Investment). If you save ten thousand dollars on a cheaper LED sign, but the sign only last about 5 years, and our Watchfire Signs LED Sign products last 10 to 12 years, did you save any money? The simple answer is no. Signdealz only sells a proven product from Watchfire Signs, and we have been selling the product for over 12 years, with 99% of our signs still in the field working.

When it came to the City of Edgewater making the decision to choose a vendor, Signdealz stepped up to the plate with a 5 year Product Warranty from Watchfire Signs and a 5 Year Labor warranty from Signdealz. We also provided The City of Edgewater with the most up to date 8MM resolution technology for the 10MM resolution price.  Signdealz also has an A+ rating from the BBB, illustrating our dedication to customer great customer service.